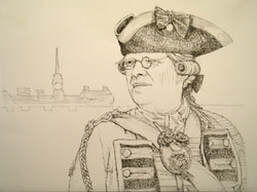 John R. Wright
is an historian, illustrator and re-enactor of some 40+ years.
He is able to combine his various interests and talents into one convenient contact for historic consultation, illustration and dioramas.

Mr. Wright is a graduate of Parsons School of Design/The New School.  After working for several years as an illustrator and art editor at various publications, he turned his attention towards history.  He was Director at the Miller House in White Plains, New York and Education Coordinator at Van Cortland House Museum in Bronx, New York.  He is the former Director at Thomas Paine Cottage Museum in New Rochelle, New York.  He is currently a part-time Historical Interpreter at St. Paul's Church, National Historic Site, in Mt. Vernon, New York.

As a member of the Brigade of the American Revolution and Wolfe's Army, and a reenactor since the American Bicentennial, Mr. Wright's areas of historical expertise include, but are not limited to, the American War for Independence and the French and Indian War.
Get in Touch